Did you sit up when you heard that question from the bespectactled vicar from Brighton?

It was during one of those Zoom televised, socially distanced, remote controlled news conferences that we’ve become so used to.  And it put the Secretary of State for Health on the spot.

Back in March, only journalists asked the questions of the Minister for the Day.  After a few week, the public were invited to join in.  I’m wondering whether the person who came up with that idea is having second thoughts now?

The morning after the Rev Martin Poole asked his question, he was invited to appear on TV and radio bulletins across the land.  Here are three reasons why … followed by a suggestion of what anyone in business (especially if they are involved in internal comms) might takeaway from his big moment. 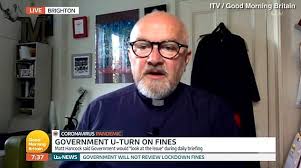 The question lasted 8 seconds and consisted of 16 words.  Here it is, in full.  “Will the government review all penalty fines imposed on families travelling for childcare purposes during lockdown?”

This isn’t the place to go into a background analysis of why this question was asked; if you’re reading this blog I’ll assume knowledge of the Cummings affair.

The point I want to share is that the question was so very short.  And it came in the setting where the public have become used to observing questions from reporters — some very senior reporters — that have been very, very, very long.

Many of those very long questions have begun with an emotional story before moving onto a claim and then meandering to a point … and finally … sometimes to two people on the panel … an actual question.

Long rambling questions aren’t how I was trained as a BBC journalist back in the early 1990s, and I’m not sure it showcases journalistic techniques at their best.

Short questions get more revealing answers.  That’s because there’s less time for the person answering the question to choose between their range of prepared answers.

One commentator the following morning described it as a ‘hallelulah’ moment for the nation.  Rev Poole himself told Good Morning Britain that a viewer in Spain had got in touch and used the same word.

Nobody was left in any doubt what the vicar was driving at.  Nobody could argue it was unfair or irrelevant.  The response it got — ‘we’ll look into this and get back to you’ — was far more solid than most reporters’ questions have achieved.

The fact that the answer very soon came back as ‘we won’t change anything’ is beside the point, and Rev Poole accepted that.  His carefully worded question had obliged a senior figure to respond.

There was no anger in it.  No backstory filled with emotion to cloud the judgement.   There is a place for these things in communications, of course, and real human stories play a huge part in that.  But sometimes, all that’s needed to get a result is disarming brevity and courtesy.

So here’s a suggestion for anyone who wants their teams and their staff to respect and trust them more.  Remind them of the Rev Poole Approach.

You probably already encourage them to ask what they like, to be unafraid, to tell their stories and to seek straight answers.  I suspect you wouldn’t be reading this if you didn’t.

But if you set them the the 16 Word Challenge next time you have a Zoom Team meeting, you’ll be showing them you’re happy to be put on the spot, too.  And that could be good news for both of you.

Looking for a web-based workshop that will encourage your staff to keep the pace up during Zoom meetings, and help you get more messages across?

Tap “Holding the Zoom Room” into Eventbrite, and join my 45 minute workshop online at 11am on Tuesday 23 June.   It’s £25 + VAT, but if you don’t feel it was worth it, I’ll simply give you your money back.