It was, perhaps, the most frightening ten minutes since I set up my business seven years ago.  More scary, even, than when the teleprompter goes down in a news studio.  And it taught me an important lesson that I hope will help you in your business.

It’s just before 1.45pm on Monday 24 August.  My three hour workshop for a big client (with breaks, of course) is due to start at 2pm.  I’ve agreed to ‘meet’ Jane, the person who’s booked me, at 1.50pm.  We’re going to check screen sharing and talk through any final requirements.

But the Zoom link is taking a lot longer to load than usual.

And then up comes a message:  ‘this account does not exist’, followed by lots of scrambled numbers.  It’s not a good look.

It was time to break the news to her over the phone: the lively, powerful, fun, interactive online training experience that was going to help her staff deliver online meetings with style … might not be happening after all.  And it’s, surely, all my fault.

Within seconds, we’d figured it out.  I googled ‘zoom crash’.  This wasn’t my fault; this is an international problem.  I think we both felt as relieved as a pair of shipwreck survivors clinging to each other as they were tossed upon a dry shore.

So it got us thinking about the need for a Plan B when you rely on tech.

How we get around this in TV News 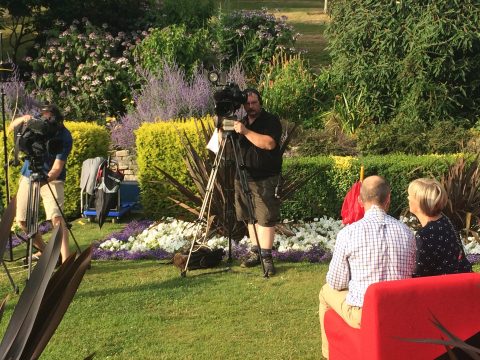 Plan A. Plan B is in the air conditioned studio.

Working in TV News, Plan B is a default position.  A recent “OB” — ‘outside broadcast’ — had been a case in point.  During a baking hot summer’s day, the editor had suggested we broadcast most of the programme from the local park.  By 5pm, we were out there: sofa, cameras, crew … but back in the studio, there was also a spare presenter, with spare scripts and spare reports, ready to go in case the satellite link to us in the park went down.

We have a phrase for what this is trying to avoid.  “Falling off air”.

So let’s just say that Jane and I spent some of the spare three hours we suddenly had to fill, testing out some Plan Bs, for the next time the tech lets us down and we fall off air, online.

Since then, I’ve taken the research further.

I’d hoped it would be easy to come up with a simple recommendation online for alternatives to Zoom.  But an hour’s research just now has only offered contradictory facts amidst a jungle of articles, some clearly planted to promote one and knock the other. 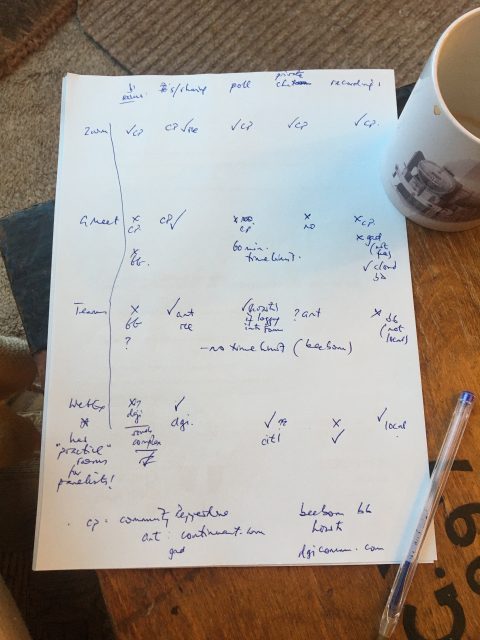 Ticks and crosses – my notes on my research. It’s a confusing picture.

Here, though, is what I’ve discovered that I hope may help you:

There’s a lot of advice out there, not all of it objective.  But of all the articles I read, this struck me as the clearest and most impartial:

… while this had an easy comparison table:

What’s on offer changes as fast as this virus.  You need to keep up.

And if you don’t, and rely on only one platform, you could find yourself falling off air, online, more often than is good for business.

If you’d like to help your staff deliver more engaging meetings and training online, my “Hold the Zoom Room” workshop may be useful.  It’s based on the fact that in TV News, we know a thing or two about holding the attention down a lens.

For a free trial, give me a call or drop me an email: