Here’s a mind-numbingly simple idea that could come in handy if you want to communicate better with your staff or colleagues.

Maybe you’re paid a salary to do it.  Perhaps you’ve got a tricky meeting ahead and you’re writing up the agenda, or you need to get some key messages out in the Monthly Update email that never seems to get read.

The idea is this.  Get out your phone.  Take a close look at a news website’s homepage.  Any homepage you like.  Go on, take a really good look.  Get forensic.

Take, for example, this page with which BBC News Online greeted its readers on the morning of 4 November.   Joe Biden hadn’t clinched his anticipated victory yet, Donald Trump claimed the victory was his, and news websites across the globe were bracing themselves for a very large number of hits from some very news hungry audiences. 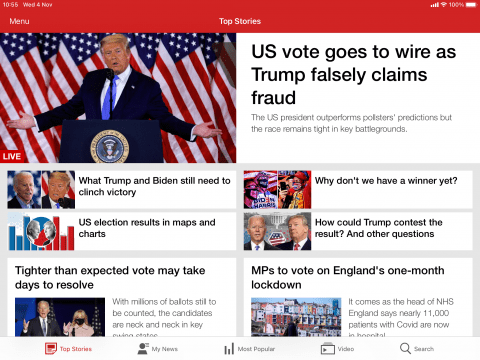 This front page — picked randomly on an exciting news day — reveals several tricks that could help you as you engage with your own audiences.

Three of the top stories use those little words that every journalist learns off by heart at journalism school.  If you use them too, you’ll immediately reassure your audience that you’re going to give them useful information.

The power of the question

This intensifies the impact on the audience.  A reader sees a question?  They’re likely to want to know the answer.  They click.  They’re engaged.

The power of the visual

Imagine that the box with the bar chart had read ‘US election results: facts and figures.’  Would you have clicked?  I’m not sure I would.  But ‘maps and charts’?  Hmm, that sounds a bit more fun.

The power of the phrase

The vote’s not just tight.  It’s not just close.  It’s ‘gone to the wire.’  Not only has the journalist used four very short words, but they’ve used conversational language.  That might reassure a reader that this article will be written in their language.  I don’t think that’s patronising.  I think it’s helpful.

So.  Now that I’ve got you thinking like a journalist, take a look at the screenshot below, from a different webpage on the same day.

But before you read on, have a good long look at it.  What tricks is the news editor using here?   I’ve spotted five, and listed them below. 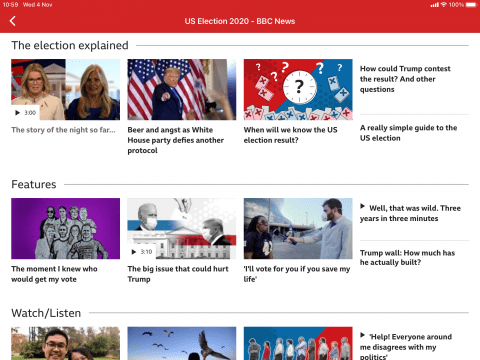 Right.  Let’s go.   How many ‘newsroom secrets’ did you spot?  Here are mine.

The power of the word ‘story’.  There’s a reason that ‘storytelling’ is big in corporate communications these days.  Since our nursery days, who hasn’t loved a good story?  Stories touch us in ways that chunks of information don’t.

The power of Detail.   Imagine that second story had been titled “White House party defies another protocol.”  Not quite so enticing, is it?  But there’s beer involved.  Mmmm.  That’s sensory.  And if you’re trying to engage, sensory is good.

The power of Reassurance.  The editor applies this technique with the phrase ‘A really simple guide.’  It recognises that I’m not an expert.  I’m busy too.  I just want the simple version.

The power of the quote.  Look carefully at the ten words beneath the picture of the tall bearded man in the facemask.  It’s nothing but a quotation.  But it’s tantalising.  It’s a tease.  Once again, I’m engaged.

The power of conversational language.  “Well, that was wild …”  With this one phrase, the journalist teases, empathises and builds curiosity.   And by promising to only require three minutes of my time, I’m once again reassured that my attention span is being respected.

How often do you think about your audience’s attention span?

Do you divide your communications into bite-size items, with friendly headlines that create curiosity?

Are you regularly asking yourself if an image or story might possibly have more impact than a bunch of data?

Do you ever ask your audience anything at all?

Don’t worry if you don’t.  Not many organisations do.  But next time you’re gearing up to communicate with your team, your clients or your customers, scroll through a couple of news homepages for a quick refresher.   It could save you a fortune in hiring a communications consultant.

But if you would like to hire a communications consultant – who’s just left the BBC after 31 years communicating with audiences by reporting and presenting TV News – give me a call.   We can have a nice chat and it won’t cost you a penny.  And if we take it further and you use my services, I promise I won’t charge a fortune.