Thinking of filming your own videos for Linked In?  Five things I’ve learnt that may help.  20 July 2021

“We’re all broadcasters now” is the catchline I came up with when we all moved to virtual working, but it’s in fact been true for some time, hasn’t it?  Every piece of research you read will tell you that it’s videos that catch the eye if you’re trying to get noticed on Linked In, far more than anything (written) like this.

This gives all of us in business a quick-win opportunity.

Let’s face it.  There are a lot of really poorly made films splattered across our social media.  And that means it’s easy, with just a little thought and effort, to make yourself stand out with a well made little film.

So here are five things I’ve learnt in the twenty or so years I’ve been editing my own news reports for the BBC.

Anyone who’s joined me for one of my communications masterclasses will know that I bang on about this incessantly.  One key skill for a journalist is, of course, deciding what needs to be included in a news report.  But the other key skill is spotting what can be left out.

I suggest you aim for no more than 2 minutes to get your message across – 90 seconds if possible.  It’s the average length of a TV news report.

If that short timeframe makes you wince, because there’s so much you want to say in your video, ask yourself: how quickly do I tune out when watching other people’s videos?

2.   Turn your camera around

Here’s the really quick win.  Making your videos look more professional can be as simple as turning your phone on its side. 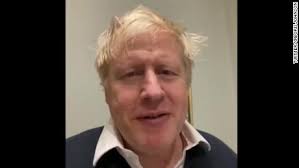 As a reporter on a deadline, I was always in a rush to get my interviews done and dusted when working with a professional cameraman.  I was often frustrated when he’d pause, rub his chin and say “hmm, we need to throw up a light or two here.”

But he was right, of course.  Lighting is crucial.  And you don’t need fancy lighting gear to do it.  Simply make sure you don’t have a big window behind you, turning you into a silhouette.  And make sure you do have a light source in front of you — a lamp, a window, or the loveliest light source of all, the sunshine. 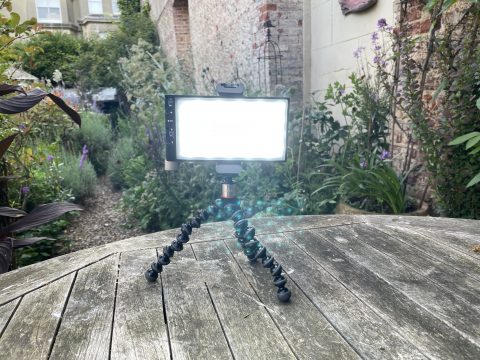 The gorilla tripod can also hold a light – this one from a company called Pixel. Both yours for less than £120

Your audience will notice what’s around you far sooner than they notice what you are actually saying.  There’s a reason camera-crews take time to frame their interviewees — they’re choosing a background that’s either relevant, or neutral.

If you’re using Linked In to build your brand, ask yourself:  what message am I sending out by the background I’ve chosen for this message?  Does a scruffy office enhance your credibility?  Is that fancy piece of artwork impressive, or is it a distraction?

If you want your audience to focus on what you’re actually saying, consider filming in front of a simply patterned wall, or outdoors in a park.   Or if you have your own branding banners, pop them discreetly at your side.

So — your message is simple, your framing is good, the lighting’s perfect and your background is subtle.  What a shame to ruin it all with the most amateur look of all — the wobble.

For the price of a few bottles of wine, you can pick up a portable tripod (sometimes known as a ‘gorilla’ tripod) which clutches your phone, placed on a table or shelf in front of you.  Spend a bit more, and you can have a lightweight tripod that stands on the floor. 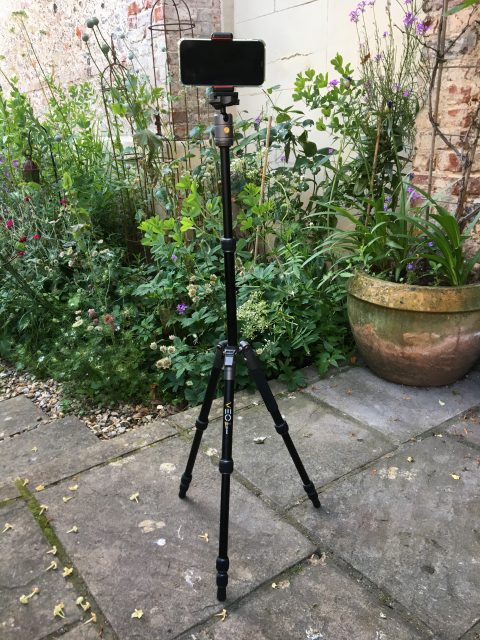 Taller tripod, with attachable camera grip – tripod by VEO, grip by ManFrotto. Yours for less than £120 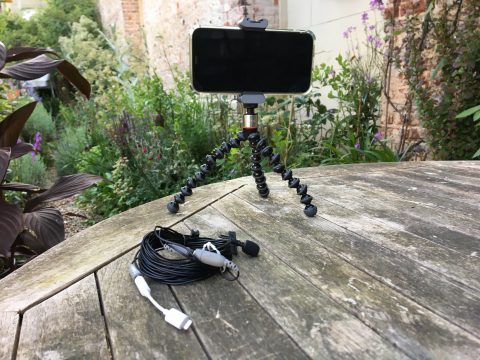 I may be fighting a losing battle here.  The Prime Minister himself posted a video recently, which broke every single one of the rules I’ve just suggested.

But maybe he was going for the shabby, on-the-run look.   If you’ve read this far, I suspect you’re not … and hope these tips have helped you realise how very little you need to do to look a lot, lot better on camera.

If you’d like me to film and edit a short video for you, give me a call.  I can help you work out to say, and explain my production thoughts — giving you the confidence to make the next one by yourself.