We’ve all endured it, haven’t we?

Your virtual meeting was scheduled for an hour.  But it began a few minutes late because Paul hadn’t sorted out his microphone and Miriam couldn’t lay her hands on the link.

It’s now been running for 47 minutes, you’ve barely covered half the ground, and your next virtual meeting is due to start in 13 minutes.

Here are three tips which may help you tackle that timekeeping culture head on.  They’re based on three secrets that reveal how news bulletins always end on time.

1:  Be clear about timings with your audience

Here are three slides from my ‘Holding the Zoom Room’ interactive virtual workshop — each slide containing a clip from a TV news bulletin. 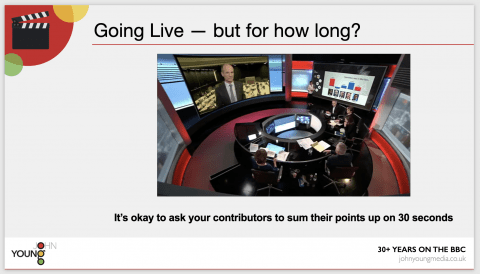 This first one (above) shows me about to make a live contribution into the national news coverage on Election Night 2019.  You can see me in that big screen on the left, standing at the count in Brighton.  The presenter, Hew Edwards, is at the big desk on the right, about to ask me for my analysis of the Green Party’s victory.

I had clear instructions from the producer of the programme — she wanted 45 seconds for my analysis.   I didn’t take offence at this — in a broadcast landscape, that’s a reasonable amount of time.  It mattered to the producer, because immediately after me, she wanted to hear from a reporter based in Norwich.  And then Glasgow, followed by Bristol.  If we all rambled on for a few minutes each, the programme’s timings would be shot to pieces.

When you’re asking for opinions from your team on a virtual call, you’re in effect a ‘producer’ of a live broadcast.

Do you let your team speak for a few minutes each?  Or do you say, ever so nicely,  “look, there are six of you here … we all need this meeting to run to time — can you let me know what you think in about 30 seconds or so each?” 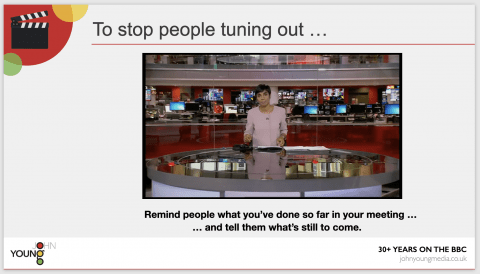 This slide shows the moment, about half way through the BBC’s Six O’Clock News, when the presenter pauses, sums up the headlines so far, and tells the viewer what’s still ahead in the bulletin.  ITV News do something similar in their bulletins.  It’s known in the broadcast world as a ‘signpost’.

If you use signposts in your virtual meetings, you’ll stop people from tuning out.

“Signposting” came about because TV bosses were terrified that viewers might just get bored and turn over to another channel.  The equivalent challenge you face running a virtual meeting is that your audience will quietly turn their cameras off and pop on a load of laundry.

To avoid that scenario, try a signpost like this:

“Right, we’ve sorted our targets for Q2, that was the hard bit — good news: we’re on schedule to finish just before 11 — in the next 20 minutes, I want to hear what each of you think of our new marketing campaign — and then we’ll end with a great story about an idea Tara in HR has had for the Christmas party …

3.  Create Space at the End 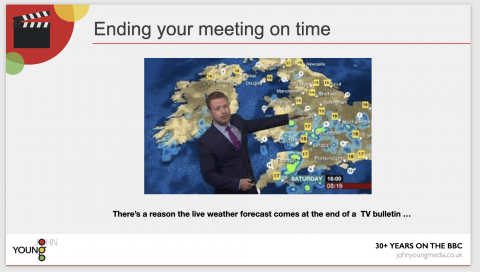 This slide is designed to get people asking themselves … how do news bulletins always end on time, when there are so many moving parts?

There are a host of answers to this, which I reveal in various lively workshops — but here’s one.

The weather forecast is usually at the very end — and delivered live.

It’s really annoying for the weather presenters like Tomasz Shafernaker, but they’re paid to do it and generally take it on the chin.

Think about where the flexibility lies in your meeting, and put it at the end.  The most obvious idea for this is the ‘any questions?’ moment.

But if you see this as a chance to build relationships within your team, it could be a free-form  invitation to anyone to, say, share a highpoint of their work that week.    The point is, this ‘slot’ can be as short or as long as you’ve got time for — or (unlike the TV weather broadcast!) quietly dropped altogether.

And if nobody takes up the opportunity, then hey, you finish early.  And nobody’s going to object to that.

These are all things that broadcasters do all the time to hold their audiences — and let’s face it, we’re all broadcasters now, aren’t we?

If you’ve got a team who would enjoy seeing those video clips, and benefit from a workshop that helps them focus a meeting and end on time, get in touch.  My workshops can be under an hour or fill a whole day — and I can guarantee they’ll end on time.